The painting that’s become a Christmas cliché, but not here in #Haiti 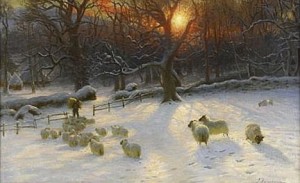 A cracker of a story this festive time of year– the most reproduced seasonally appropriate holiday painting is apparently of sheep in a snowy landscape, titled ‘Beneath the snow-encumbered branches’. The 1901 oil on canvas work by Scottish painter Joseph Farquharson has risen to the heights of a seasonal cliché after it was used on a HallmarkChristmas card.

It happened quite by chance, being in private hands and considered good but unexceptional till card company WN Sharpe purchased the rights to use the painting in greetings cards. When the company was acquired by Hallmark, it put Mr Fraquaharson’s representation of his Royal Deeside estate on one of its cards. A Hallmark spokesperson once ascribed its popularity as “something to do with the unique atmosphere Farquharson creates, the dramatic yet subtle depiction of a winter landscape.”

That’s true enough, but as this article points out, such wintry scenes  are incongruous for many parts of the world, not least the Caribbean. We noticed how different it felt to have Christmas lunch in Haiti’s blazing sunshine, with rum punch all around. The mulled wine, so welcome in wintry England, tasted stronger than it might.

Unsurprisingly, angels are more seasonally appropriate for all locales, including those sans snow. A popular example is Haitian painter Gerard Fortune’s ‘Angel’.