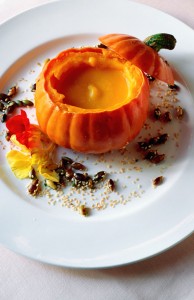 New Year’s Day and Haitians are quaffing pumpkin soup by the gallon, drinking in the 210th anniversary of their independence. For all his histrionics and high drama, Moliere would probably have understood Haiti’s fascination with Soup Joumou exactly. “I live on good soup, not on fine words,” he once said and for Haitians, the good soup represents the finest words they ever heard: liberty.

Partaking of the food forbidden by their French masters is a delicious way to live freedom. I’ve lived in six countries in the last five years and a few others before that, but I could never have imagined a people so consumed by soup. (At its most basic, soup is surely the most basic of foods and can be the cheapest, most forgiving dish to feed a crowd. Consider stone soup, refrigerator soup, garden soup, bean soup, anything-goes soup.)

The story goes that it was illegal under the French for Haitian slave to eat soup. The privilege was rather puzzingly reserved for the master. (Puzzling because soup is cheap and presumably the very thing you’d want the slaves to eat, but perhaps the French wanted to be as difficult as possible.)  Another story goes that the French reserved for themselves the right to eat Soup Joumou. So when Haiti signed its Declaration of Independence in the city of Gonaives on January 1, 1804, liberty was interpreted as the chance to guzzle unlimited amounts of soup.

New Year’s Day or Haitian Independence Day consequently means cooking and eating Soup Joumou. Every family has its own particular recipe. Every family tries to keep to tradition. It is a unique and rather touching add-on to the revolutionary fervor that sustained Haiti through the 13-year freedom struggle that established it as the world’s first black republic. T’was well said that a first-rate soup is more creative than a second-rate painting. Or memories of a revolution.

Here’s a recipe as you travel the road that is life.