Israel’s Ariel Sharon: From the Very Big Sleep to the Great Beyond 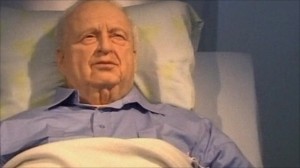 Ariel Sharon’s “life is in danger”, the media has been reporting. It has to be asked, has he not really been pretty much dead these past eight years? As Kurt Vonnegut wrote in his dark way, “how nice — to feel nothing, and still get full credit for being alive.”
After his  2006 stroke, as David Blair writes in The Daily Telegraph, a ventilator has breathed air into Mr Sharon’s lungs and a tube has passed essential nutrients directly into his stomach. At the Sheba Medical Centre, a long-term care facility near Tel Aviv, a team of nurses has kept watch over Mr Sharon, moving him around to prevent bed sores, while the machines hummed and purred, in vigorous automated life.

For a long time, Mr Sharon has not been a living, breathing person, in the exact sense of the term. He was not really dead but there was an absence of life.

Ironically, Mr Sharon’s predicament began a few months after the death (by unplugged feeding tube) of the comatose Terry Schiavo, a case that deeply divided America about the rights and wrongs of euthanasia. After 15 years, Ms Schiavo was allowed to slip out of the big sleep and into the great beyond.

To many though, she was already there, even before her physical death. As is Mr Sharon?