In death, #Mandela comes to life in #Haiti – on tap taps, as a road sign 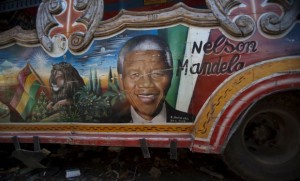 In death, Nelson Mandela has come startlingly alive in all sorts of ways and in all sorts of places. Consider the photograph (right) of a Port au Prince tap tap with Mr Mandela’s face painted on one side. This is interesting for all sorts of reasons. When Mr Mandela passed away, there was no visible outpouring of emotion in the way that followed news of Hugo Chavez‘s death. There was no graffiti promising eternal remembrance. There was no outpouring of gratitude all over again for the Petrocaribe munificence instituted by Mr Chavez. But as Alex, my kreyol instructor says, it’s all about “kalite moun” (the kind of person).

The Haitian who cared intensely about the late Venezuelan president was the sort of person who would rush out and write some graffiti. Those who care about Mr Mandela write elegant monographs, or well-argued newspaper articles, or make documentary films about the African struggle.

This is why the Haitian government named a road in Port au Prince after Nelson Mandela. And that’s when I remembered Thabo Mbeki’s “I am an African” speech.

For those who recall it, Mr Mbeki’s May 1996 homage to South Africa’s future and its past had echoes of Martin Luther King’s ‘I have a dream’ speech.

For those who don’t remember much about the occasion, Mr Mbeki was speaking on behalf of the African National Congress on the passing of South Africa’s new constitution.

He started as follows: “On an occasion such as this, we should, perhaps, start from the beginning.

So, let me begin.

I am an African.

I owe my being to the hills and the valleys, the mountains and the glades, the rivers, the deserts, the trees, the flowers, the seas and the ever-changing seasons that define the face of our native land.”

And then he went on, celebrate the country’s “audible silence about these ancestors of the generations that live, fearful to admit the horror of a former deed, seeking to obliterate from our memories a cruel occurrence which, in its remembering, should teach us not and never to be inhuman again.”

Wisely, he added, “I am formed of the migrants who left Europe to find a new home on our native land. Whatever their own actions, they remain still, part of me.”

So to the Haitian government’s explanation for renaming Route du Canapé Vert Avenue Nelson Mandela: “To honour the memory of the symbol of the anti-apartheid who devoted his life to the liberation of the black people of South and provide an example to future generations (of) African struggle.”

That’s something Haiti identifies with entirely.