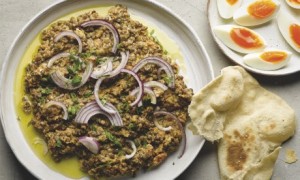 It’s entirely appropriate in January to rhapsodize over lentil recipes, as the inimitable Yotam Ottolenghi did in The Guardian. “Lentils are hard to beat in terms of ease and versatility. They’re also kind to both wallet and gut, which is just as well after the recent excesses,” he wrote, offering two, relatively easy recipes to sup on.

But it was his ‘Crushed puy lentils with tahini and cumin’ that had me rivetted. Especially as I always have a jar of home-made tahini in the fridge. As well as toum (Lebanese ‘mayonnaise’, an emulsified, stark-white spread made of no more than garlic, salt and oil. If you don’t eat it all at one go, you can cook with it for an easy garlic hit). And I’m rather prone to whipping up lots of cartons of hummus (all the better to freeze for later) using dried chickpeas, soaked, boiled and then whizzed with oil, salt, lemon juice and tahini.

Mr Ottolenghi described his lentil dish as “a little bit like hummus, though much easier and quicker to prepare”. He’s right on all counts.

It is a remarkable recipe and entirely consistent with Mr Ottolenghi’s signature repertoire of unabashedly bright and bold flavours marrying with impunity and adorning the plate in perfect felicity. His creations are often described as rooted in, but not confined to, his Middle Eastern upbringing. As befits a man who has managed to sell his vision of the Middle East in jar in swish London locations, Mr Ottolenghi combines flavours from across the Middle East – Syrian, Turkish, Lebanese, Iranian, Israeli and Armenian – with a distinctive western twist.

That is why lentil recipes are so appropriate in January. After weeks of feasting, the asceticism of a lentil dish hits all the right buttons. In a way that smoked salmon and Christmas cake could not.