Now, Edward #Snowden has to be Person of This Year & the Last 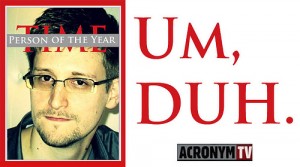 TIME magazine didn’t think so (and has been pilloried for it, as illustrated by the photo on the right.) The Guardian did. No matter. It’s official, now that President Obama has offered a mea culpa of sorts for mass surveillance and promised to rein in America’s rogue agencies. Edward Snowden is person of the year. Emphatically so.  A man of conscience who chose, as this blog noted back in June to follow his own moral lodestar, quoting Benjamin Franklin to The Guardian’s Ewan MacAskill, Glenn Greenwald and another journalist as he sat lonely and on the run in his hotel room in Hong Kong. “Those who surrender freedom for security will not have, nor do they deserve, either one,” Mr Snowden said, to explain why he elected to blow the whistle and subsequently out himself in order that innocent colleagues didn’t suffer.

Without Mr Snowden, the US President would not have banned US eavesdropping on the leaders of allied countries and started to rein in the vast collection of Americans’ phone data. President Obama was forced to reassure Americans and foreigners that the US will take into account privacy concerns and despite criticism that the reforms are relatively limited, it is a welcome step forward.

What next? After a token punishment – perhaps 60 days? – Mr Snowden should have the right to return to the country he has served so well and bravely.