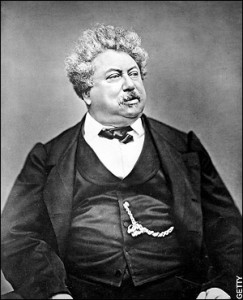 Last night, Britain watched the first in a new BBC series inspired by Alexandre Dumas’s Three Musketeers. Yet again, a magnificent run for the fertile and soaring imagination of a man once considered the world’s most famous Frenchman. And arguably, it all started with Haiti, where the novelist’s father was born, dark-skinned, and of a slave mother, and painfully vulnerable to racist insults.

His son, young Alexandre, born just two years before Haiti won freedom from France, would grow up his avenger. As his Pulitzer Prize-winning biographer Tom Reiss has revealed in ‘The Black Count’, the young novelist was keen to avenge the racial abuse heaped on his father. A noteworthy piece in The Independent describes the literary consequences of Dumas’s “psychological DNA”. He would constantly “invent sons who valiantly keep faith with slighted fathers; victims of gross injustice who pursue vengeance and vindication; short-fused warrior heroes whose swords jump from the scabbard at the merest whiff of an insult.”

In The Three Musketeers, recounts The Independent, d’Artagnan’s father tells his son, “never submit quietly to the slightest indignity (for) it is by his courage alone that a gentleman makes his way nowadays… Have no fear of many imbroglios, and look about for adventures”.

In 1843, he wrote ‘Georges”, a novel that takes as its main protagonist the son of a mulatto planter in Mauritius, who seeks retribution for his father and later, goes on to lead a slave revolt.

The Haiti strand of Dumas’s DNA?