Syrian propaganda in the fog of war? It was ever thus. Think World War II 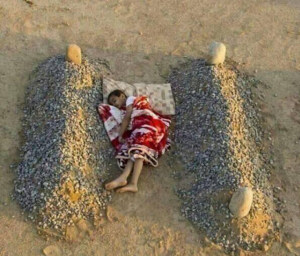 I thought about WWII and the over-200,000 different propaganda posters produced by the US when I saw Syrian opposition leader Ahmed Jarba’s tweet of an achingly sad photo (see right) that appears to show an orphaned Syrian child sleeping between his graves of parents and the subsequent revelation that it was all fake.

As Foreign Policy’s Passport blog explained, the child was not Syrian but Saudi, the graves were nothing so macabre, and it was a posed shot, more particularly part of an art project by Saudi Arabian photographer Abdul Aziz Al-Otaibi who used his nephew as a model.

Mr Jarba subsequently deleted the photo it seems, but the story lives on and is likely to acquire different, if still ghostly proportions, ahead of Wednesday’s Geneva talks. “The opposition,” concludes Foreign Policy, “is getting a little desperate and its PR apparatus needs some work.”

That’s probably entirely true in terms of winning the propaganda war. And one has to salute the US on that front during WWII. President Roosevelt created the Office of War Information (OWI) to focus hearts, minds and efforts on disseminating information in a strategically smart manner. The OWI used multiple media to spread the word, not least Hollywood movie studios. The Writers’ War Board was organized as a liaison between government and writers and though its offerings were not quite government drivel, they were partisan enough to help the propaganda effort.  The War Advertising Council helped supervise commercial support for the war and there was considerable money to be made by companies that associated with the war in a ‘good’ way. For example, Lucky Strike, which said it changed its packaging from green to white to save bronze for weapons. And Coca-Cola, which showed the drink being imbibed by soldiers and other defense workers.

Through the war, the US Government produced more posters than any other country at war, selling a feelgood, happy-clappy, build-grow-believe message that served the propaganda battle well in the fog of war.

It was ever thus. The Syrian opposition needs to think smarter.