Atlanta, the old ‘New South’, & its mayor have a soft touch, hard head 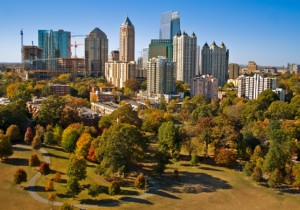 Mayor Kasim Reed’s rather full face beams at you, moon-like and round, at Atlanta’s entry point – Hartsfield-Jackson airport. And so it should. The mayor, a favourite with publications such as ‘Ebony’ and ‘Black Enterprise’ has also been praised by Thomas Friedman in ’The New York Times’ and by ‘The Washington Post’ for combining, in Mr Friedman’s words, “a soft touch with a hard head”. For, Mr Reed famously balanced Atlanta’s budget and contributed to the quality of life it offers everyone by limiting city employees’ pensions and spending instead on the police force and community centres in poor neighbourhoods.

Civic justice seems to be a particularly strong theme in Atlanta, whose most famous daughter Margaret Mitchell told the story of inequity and tangled lives and emotional connections so beautifully in ‘Gone With the Wind’.

Consider Atlanta’s origins and ethos. Established in 1837 at the intersection of two railroad lines, it rose (as did Scarlett O’Hara alongside Frank) from the ashes of the Civil War to become a centre of commerce. After the Civil Rights Movement, Atlanta was memorably a city “too busy to hate” and it is unsurprising that its workaday ethos is reflected in its booming economy, which is 15th among world cities and sixth in the US. In the late 19th century, a leading newspaper editor, Henry W. Grady, promoted Atlanta to potential investors as a city of the ‘New South‘, based upon a modern economy and not on agriculture. Georgia Tech was born and a well-attended Cotton Exposition.

It might so easily have been different. At a remarkable exhibition, ‘Health is a human right: Race and Place in America’, laid on by the US Centers for Disease Control and Prevention, I saw how it was for black people in the American South as recently as 1952. The exhibition, which examines historic challenges of the past 120 years in achieving health equity for everyone in the US, features a documentary (by George Stoney) on Miss Mary’s life and times. She was a midwife and through her daily round, we see the poverty that marked the lives of black Americans and the racial health disadvantage that attends them throughout.

It’s work in progress but at least, America is not in denial anymore. And Atlanta, capital of the ‘New South’, probably illustrates the story better than most. It says something about the harbinger of the New South that Atlanta is increasingly the location for films and TV shoots. ‘The Hunger Games: Catching Fire’, was filmed largely in Atlanta, residents proudly recount. Go figure.