Ode to openness? An unbuttoned La Maison Blanc, rather than the White House 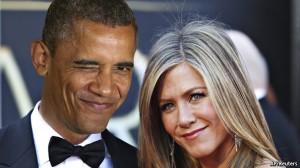 As French President Francois Hollande met Pope Francis today (Friday), my thoughts turned to  a rather wild piece in the normally stuffy Economist. Okay, so it was fantasizing but it’s still worth an idle daydream or two – would the world be a better place if the White House behaved more like La Maison Blanche and the Elysee Palace more like the White House?

Ergo, should America should be more unbuttoned about the love lives of people in high places? And France have a bit more restraint?

In its typical way, The Economist has driven home the point with this delightful piece of nonsense: Ie, that ‘People’ has been reporting a well-known fact, which is President Obama’s affair with Jennifer Aniston, to the annoyance of ‘First Girlfriend’ Katie Couric, who Mr Obama took up with when he fell out with long-term partner Hillary Clinton.

Anyone who follows world affairs (pun not intended) would know that this is a thinly veiled parody of the French President’s life and times (through the prism of news reports).

But it’s still a good question. Would America be better off if it were less prone to news frenzies about the private lives of public figures? Or, as The Economist puts it, “Would America be a better place if its public figures behaved like François Hollande, Ségolène Royal, Valérie Trierweiler, Nicolas Sarkozy, Jacques Chirac and François Mitterrand, and if its people took as relaxed a view of sex as the French do?”

Yes, perhaps, it concludes. Perhaps “more talented Americans would go into politics if they did not think they would be roasted alive for normal human frailty. There  might be more Jack Kennedys and fewer Mitt Romneys.”