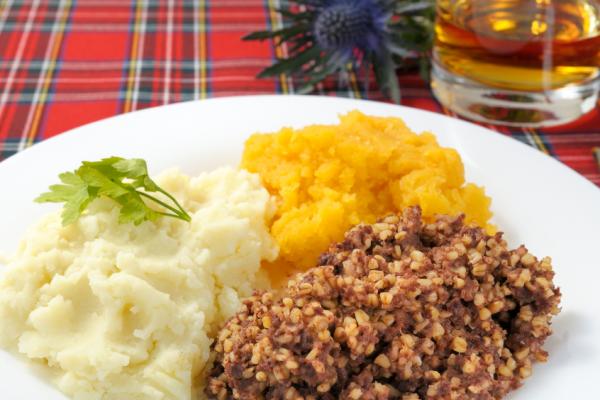 Some hae meat and canna eat,

And some wad eat that want it;

But we hae meat, and we can eat,

And sae let the Lord be thankit.

– The Selkirk Grace or the Burns Blessing, which Robert Burns was said to have delivered at a dinner given by the Earl of Selkirk

Burns Night in Port au Prince is nothing like the real thing. It’s not cold enough properly to relish a nice hot bowl of Cock-a-Leekie soup. I’ve never seen haggis in the supermarkets here (but that’s not to say you can’t have anything you want so long as you can pay for in the Haitian capitall). Fresh cream is another problem (though chiller cabinets have many varieties of imported tetrapacks) so Cranachan (oats, cream and raspberries) doesn’t leap to the mind. There’s an abundance of lokal (as they say in kreyol) neeps and tatties, so at least that part of a Scottish dinner is easy to recreate. As also beef tenderloin doused in Drambuie, liquor being ridiculously cheap in Haiti because it appears not to be taxed by the government.

I suppose the point about Burns Night is not to approximate a supper that might be cooked and eaten in bonnie Scotland. Instead, it is to properly celebrate the life and poetry of Robert Burns on his birthday, January 25.

Or any day at all. Burns Night is increasingly popular all over the world, not least the US, with the Christian Science Monitor describing how to do one as simply and authentically as possible, right down to the plaid fabric runner, thistle and heather flower arrangements, place cards tied with plaid ribbon to miniature bottles of Scotch and a printed copy of the Burns blessing. Oh, and cock-a-leekie soup, for which CSM helpfully provides a recipe.