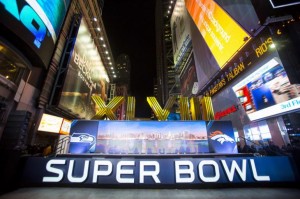 The place, alas (or perhaps blessedly) determines perspective. As millions of Americans settled down to their guacamole, good beer and chocolate chip cookies (as well as the Super Bowl), Slate’s inimitable Joshua Keating offered a remarkable take on how the event might be described by people far away and if it were not in the USA, the world’s sole superpower.

“This Sunday, the eyes of millions of Americans will turn to a fetid marsh in the industrial hinterlands of New York City for the country’s most important sporting event—and some would say the key to understanding its proud but violent culture,” he began using words reminiscent of a description of a rather gruesome Buzkashi match in Afghanistan.

(Those au fait with Buzkashi will know that it needs a strong stomach to be a spectator, with horse-mounted players endeavouring to drag a goat carcass toward a goal. As Whitney Azoy noted in his book ‘Buzkashi: Game and Power in Afghanistan’, “leaders are men who can seize control by means foul and fair and then fight off their rivals”. That, in a line, is the brutal basis of Buzkashi. If you’re not Afghan, that is. What of the Super Bowl?)

Here’s Mr Keating: “The ethics of such an event can be hard for outsiders to understand. Fans, who regularly watch players being carted off the field with crippling injuries, are unbothered by reports of the game’s lasting medical impact on its players. Nevertheless, fans and the national media can become extremely indignant if players are excessively boastful at the game’s conclusion.”

He goes on, “Foreign human rights NGOs have often found it difficult to reconcile their respect and appreciation for America’s rich cultural heritage with their shock at the violence, excess, and wastefulness of this event. But however problematic the international community may find the game, it is a rare unifying tradition that binds most segments of a society increasingly divided by class, culture, and geography.”

Elaborating on the theme of American insularity, Mr Keating says, “Despite decades of exposure to the outside world through trade and globalization, Americans have resisted adopting internationally popular sports like soccer, cricket, and kabaddi, preferring instead a complex, brutal, and highly mechanized form of rugby confusingly called football. (Except for in a couple of instances, feet do not touch the ball.)”

This is quite simply brilliant.  But then Mr Keating has been at this awhile. He has made something of a feature of providing cultural commentary on events in the US using the very tropes the Western media employs to describe matters in faraway lands.

He’s become very good at it and in a sign of the high admiration his work is being imitated by The Washington Post’s Max Fisher.

It’s probably only a matter of time before the ‘Watching the Americans’ appears in book form (the title being an appropriate tribute to Kate Fox’s anthropological study of English habits, beliefs and cultural practices.)