Five months ago, Sonoma city found its way into the top 10 friendliest cities in America, or so said a reader poll in Conde Nast Traveller magazine.

Most people, it seemed, found Sonoma attractive simply because it was ‘not Napa’. Which is to say it isn’t all puffed up and expensive. Instead, it’s laid back and quaint and charming.

This is absolutely true. Over a rainy long weekend in Sonoma, we visited the very last (of 21) Spanish Missions in northern California (see the bell on the right) and absorbed the extraordinary story of the highwater mark of Spanish expansion in North America. Spain established these religious/ military outposts in an attempt to colonize the Pacific Coast and have a toehold in frontier country (with awful consequences for Native Americans). 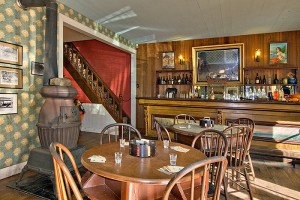 On to the Toscano Hotel, built in 1851, and one of the oldest commercial wood-frame structures in the city. It became a working man’s hotel in 1886, courtesy a Mr Cuicci from  Tuscany and occupied a significant place in the lives of the Italian quarry workers hired to work in the hills. 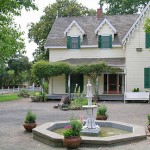 And finally, the pre-fab mansion of the great local worthy, General Mariano Guadalupe Vallejo, who helped California transition from a Mexican district to its manifest destiny as an American state. Despite his enormous wealth, he died on the fringes of his once vast landholdings at Lachryma Montis (see right).The Conde Nast Traveller poll that found Sonoma friendly, said that “travellers searching for a down-to-earth alternative to Napa should look no further than Sonoma… above all, it’s known to be a wonderful place to unwind and just enjoy the day.”

Some might say that’s the least you’d expect from a city – that it would enable visitors to unwind and enjoy the day.

Even a rainy day.