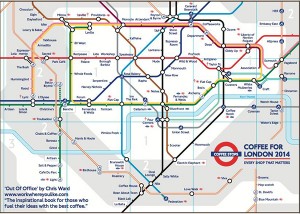 The ‘coffee stops’ tube map of London (see right) with stations named for the best coffee shop nearby is a brilliant, if not particularly new, idea. Minneapolis does a food truck map. So does Las Vegas and New York, to mention just a few North American cities that take street food pretty seriously.

What makes the London map different is it tells you the what (best coffee shop) and which Tube line to get there. It’s flaw lies in in failing to name Tube stations so you’re not quite sure where to disembark if you’re headed for say, Salt and Pepper on the District (green) line.

Despite its shortcomings though, the ‘coffee stops’ map is noteworthy for following the Tube map so exactly.  It can transmute easily across continents creating a whole new kind of cartography that has less to do with geography than with a city’s culture. Or conveniences.

It prompts the thought that cities anywhere could do the same – with any form of public transport. In the absence of public transport, as in Port au Prince, neighbourhoods could be categorized by the curiosities or conveniences they offer (supermarket; hardware store) and/or the best griot (fried pork) and BBQ chicken-sellers. So how ’bout Art Alley, Poulet Point,Gare de Griot?