Like a megacity, Port au Prince is an island of wealth in a sea of despair 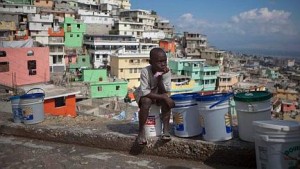 You don’t think income disparity when you wander around Port au Prince. You think hideous poverty. You don’t think about the 1% of Haiti, ie the 10 or 15 immensely wealthy families. Instead, you see the teeming thousands – walking to save the tap-tap fare or engaged in incredibly small entrepreneurial efforts – six rolls being hawked at a street corner. Yet, in Port au Prince, home to more than a third of Haiti’s 10 million population, income inequality is said to be particularly pronounced. (Income disparity is lower in the Haitian countryside than in the cities.)

But stark income disparity is not only the preserve of cities in poor countries. It can be striking even in the most developed cities in the world. As a famous economist recently said, travel just six miles east or 14 stops on the London Underground, from Westminster, the heart of government, to Canning Town, and life expectancy falls six months with each successive stop.

Meanwhile, megacities (like Mumbai and Nairobi) are said to be “small cities surrounded by huge slums – pockets of wealth in a sea of despair”. That’s a striking image. Port au Prince, with its entitled 1%, seems to be in the same mould. But the pocket of wealth is very small and the sea of despair very wide.