Is the El Rancho hotel a sign Port au Prince has had a chance to recover? 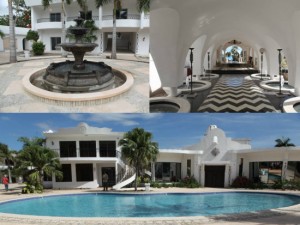 I thought of the bleak Lonely Planet description of Port au Prince back from just a few months after the 2010 earthquake as I walked into El Rancho.

The hotel (see right) has recently been re-done, earthquake-proofed and prettified. It looks quite simply stunning (in Port au Prince or anywhere).

But back then, Lonely Planet was recording how Port au Prince had “been all but obliviated by the earthquake of January 2010. Several of its major hotels, hospitals and major government buildings (such as the national palace and UN headquarters) were destroyed. The cost in human lives and misery is staggering. Other than relief and aid efforts, travel to Port-au-Prince should be avoided until the city has had a chance to recover.”

Surely El Rancho is a sign that it’s had a chance to recover?

El Rancho is yet another rather nice hotel in Port au Prince (a good addition to the list after the Best Western Premier. Read my New York Times piece on its opening here). This can only be a good thing in a city that needed such establishments fairly urgently what with all those bigwigs, Good Samaritans, heavy-hitters, grieving  members of the diaspora and others trotting in and out after the devastating quake.

There are other signs of recovery – two cinema halls are being refurbished. The government is working on roads all over the place (with PetroCaribe funds, as is commonly said). New restaurants are coming up with remarkable regularity (Chez Nathan, en route to the airport, being a good example as I described in my Guardian piece).

But any real recovery would have to be democratic and all-embracing, enabling the tent-dwellers to find other answers. Some say it must include a reason to believe the tent will never be a permanent solution. It won’t magically produce a free home. Especially if you have another outside Port au Prince.

This is controversial territory but many believe it’s crucial to the city’s recovery.