Sphagetti and meatballs: In praise of an endangered culinary cliche 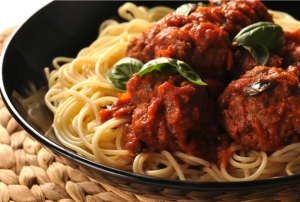 The restaurant scene in Port au Prince has as much variety as it can bear (kreyol, French, Lebanese, sushi, tuna pizza, European fare of various kinds and so on and so forth) and there’s probably decent spaghetti with meatballs to be had.

But we made it at home, realizing that we were, in effect, paying homage to a glorious but endangered culinary cliché.

As others have pointed out, it’s a sure sign that a dish is out of fashion when it has hardly any suggested wine-pairings. Especially from a new or current crop of wines.

Fortunately, Mr Daley offered some ideas, cherry-picked from suggestions by discerning sommeliers. These include:

Culinary fashions are funny things. Once upon a time spaghetti and meatballs was considered ‘exotic’. And so it was, with America’s National Macaroni Manufacturers Association publishing the first recipe back in the 1920s, in deference to its growing availability from off the hobs of early 20th-century Italian immigrants. Now, it’s nursery food, a relic from a time when less-sophisticated tastes governed menus.