Haiti’s McDonaldization: No purchase in becoming a fast food nation 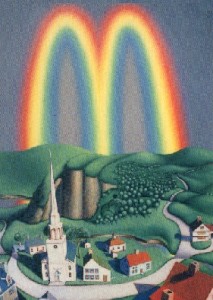 Someone reported seeing a Domino’s Pizza outlet in Petionville, the swish part of the Haitian capital, the other day, but could not stop to verify – its plans or its products. Everyone who heard the story shook their head.

The involuntary response seemed to revolve around two key reasons:

First, it seemed strange that the world’s largest pizza chain would’ve added Haiti to its far flung empire of 70 countries.

Second, was there anything to celebrate about the potential McDonaldization (in this case, Dominosization) of Haiti at some point in the future?

They had a point. Should the real or imagined entry of a fast food chain be seen as a sign of progress? Especially, when one of the few discernable tranformations wrought in poor countries by fast food outlets is to enable the well-fed wealthy to become fatter or gros as the French evocatively put it.

And then there is the paradox of the fat poor. This Harvard paper describes the extraordinary contradictions faced by many low- and middle-income countries’ “struggle with the so-called ‘dual burden’ of obesity and underweight.” It’s easy to understand how that can happen – there’s too little nutritious food that’s affordable. The junk food culture contributes to this – with or without the international version – because indigenous imitators spring up to feed the appetite for high-calorie foods and sugary beverages that make a burger, fries and coke nauseatingly more-ish. This is one of the reasons for the “globesity epidemic” in countries rich and poor, with 500 million obese adults and worldwide and a total obese population of 1.5 billion.

Even so, when McDonalds opened its doors to customers in Ho Chi Minh City in July, many saw it as a sign that Vietnam was finally joining the “club”, that group of developed or developing countries that can hold up the golden arches.

Haiti is emphatically not in that league. Yet. And it’s hard to see it sustaining a Domino’s either. But then nor does it need to. You learn about indigenous fast food in emaciated, war-torn countries if, like me, you’ve lived in places like Afghanistan and Haiti. They don’t have international fast food chains because they’re too insecure or too poor. But their street food is about as fast – and as good – as it gets.