Haiti: The McDonalds effect, but it’s not McDonaldization 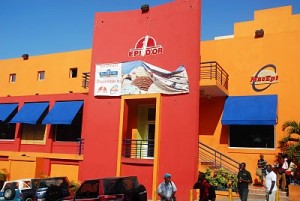 The McDonalds effect has already happened in Haiti. In a way. If you believe that the ubiquitous, cheap and readily available hot dog and pasta is junk food.  And if you agree that lower-cost competitors selling Macs are part of the same junk food phenomenon. And that Epi d’or is a chain of sorts too.

After all, it does the MacEpi. And it’s present in Port au Prince and  Dar Es Salaam.

So much for the McDonalds effect. Don’t expect to see McDonaldization though, or the four characteristics described by sociologist George Ritzer in his 1993 book. Mr Ritzer wrote that McDonaldization was a reconceptualization of rationalization, moves a culture away from traditional thought processes and makes global homogenization possible.

If internalized, the four characteristics – efficiency, calculability, predictability and control – add up to a profound social and cultural change. Or else there’s countries like India, where a relatively modern concept like international fast food chains flourish side by side with traditional processes – and crucially, bad business habits.