Haiti’s Citadelle cannot be called awesome; it is awe-inspiring 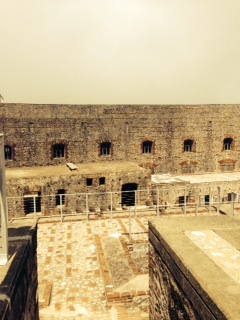 It speaks of a deadly steeliness, building a great big brooding fortress at the very top of a steep mountain that’s shaped as its name suggests, like a Bonnet l’Eveque (a bishop’s hat or mitre). But in the early 19th century, King Henry Christophe’s strategic defensiveness was at its height. And he ordered workers to start hauling rocks 970 meters above sea level, build walls at least 12 feet thick and then round off the whole effort by pulling heavy mahogany gun carriages up the hill.

Cannon from across Europe were subsequently positioned in the fort (to the left, see a British one from 1742).

The Citadelle is still the largest fortified building in the Western Hemisphere.

“You weren’t paid to help build the Citadelle,” D. Gabbart from the tourism ministry explained to us, “you did it because you were told that if you didn’t, the French would be back and you would be a slave again.”

It sounded like a plausible if slightly sunshine view of the strict order Christophe imposed on his kingdom and the backbreaking labour extracted from his people.

But wandering around the Citadelle, it’s hard not to be struck by the wasteful futility and reflexive fear and ignorance that impelled it to be built. By 1814, Napoleon’s army was weary and defeated and the reconquest of Haiti was not on France’s near and far agenda. Just a few years after the Citadelle was built, Christophe had committed suicide and the fort was left abandoned and forlorn.

It still stands forlorn today, despite some signs of rehabilitation and a distinct effort to promote tourism. They’re working on the armory and governor’s residence museums but these are not open to the public as yet. The Citadelle is distinguished by its state of neglect. Unlike other forts almost anywhere in the world, it is littered with 163 cannon and thousands of cannonballs. Those who might’ve wanted to cart them away, did not. It was probably too hard. And there is no foundry nearby to melt them down. It’s a reflection of the lack of opportunity that besets life here in so many other ways.