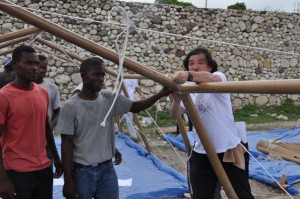 We’re firmly in la saison des pluies here in Haiti now and the rainy season is exerting its usual effect – flooding roads and creating temporary rivers bearing trash and a rich cargo of mud. The roads, or what passes for them, become impassable. There is an immutability to this city’s woes. But oddly enough, it also makes for a sense of impermanence that should, technically, chime with the work of celebrated Japanese architect Shigeru Ban.

Those au fait with Mr Ban’s accomplishments would remember that he won architecture’s Nobel, the Pritzker Prize last month. Those who know his style would recall that he is particularly famous for designing (temporary) shelters after natural disasters in places like Rwanda, Turkey, India, China, Haiti and Japan.

In fact, the Pritzker Prize jury cited the fact that “his buildings provide shelter, community centers and spiritual places for those who have suffered tremendous loss and destruction. When tragedy strikes, he is often there from the beginning.”

As an architect, one could ask for no higher commendation; no greater plaudit.

In Haiti, Mr Ban constructed paper emergency shelters for those displaced by the 2010 earthquake. In collaboration with professors and students from Universidad Iberoamericana and Pontificia Universidad Catolica Madre y Maestra of the Dominican Republicand, he built 50 shelters using paper tubes and some other local materials.

But unlike his replacement cardboard version of the quake-ravaged 19th-century Christchurch Cathedral, there’s no sign of the paper shelters four years on from the earthquake that practically flattened Port au Prince. La saison des pluies accounts for that.