Afghanistan’s growing urban sprawl: Taking another road to the future? 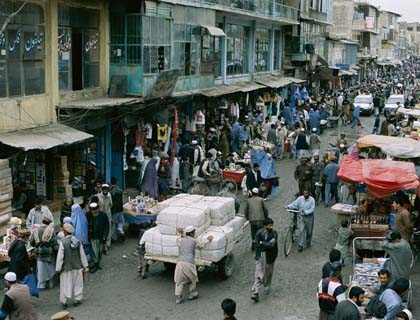 In his excellent New Statesman piece on Afghanistan, William Dalrymple argues that the country is changing before our eyes and it’s not just the tri-plier effect of “television, internet and an ebullient media”.

Afghanistan “is the fastest-urbanising country in Asia,” he writes. “Its cities have grown exponentially – Kabul alone has 20 times the population it had in 2001.”

He’s entirely right about the process – and pace – of urbanization but the Kabul figures had me wondering.

According to this 2009 report, quoting the World Bank and others, “Kabul’s population has tripled since late 2001, to approximately 4.5 million people, making it perhaps the world’s fastest-growing city in the last eight years.”

And then it talks about the urbanization beyond the capital. “Rapid growth has not been confined to Kabul, however,” says the report, quoting World Bank estimates that 30% of Afghanistan’s population is urban. Incidentally, it tacks on the Afghanistan Research and Evaluation Unit’s view that the WB figure is too low.

Whatever the (unsurveyed, uncounted) present and the beckonning future, what we do know for sure is that (as the report says) in 2002, only 22% of Afghanistan’s population lived in urban areas. And that Kabul’s population growth since 2001 is mainly on account of returning refugees, displaced persons and migrants – both economically motivated and forcibly displaced. That was 80% of all the people who flowed in, over the last 13 years.

That can only grow, if – and there’s a big ‘if’ – Afghanistan has turned a corner (with its seeming success and swelling joy on election day, April 5). And then, as now, city planning will be the need of the hour as anyone who’s ever lived in Kabul would know all too well.