The audacity of Afghan hope, as detailed by a man named Ghani 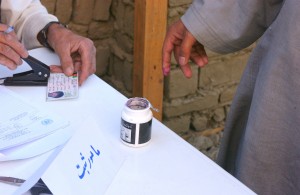 I remembered William Dalrymple’s excellent piece in the New Statesman when I spoke to Mr Ghani after Afghanistan’s Independent Election Commission released partial results from the April 5 presidential election (but more about my conversation later). The results, which account for just 10 per cent of the votes cast in 26 of Afghanistan’s 34 provinces, showed Abdullah Abdullah leading rival Ashraf Ghani.

Click here to read William’s piece, detailing his impressions of the three frontrunners in the race to be Afghanistan’s next president. He inclines – as did the opinion polls – to Ashraf Ghani, or Ashraf Ghani Ahmadzai, as he’s smartly renamed himself for the elections.

So to the man named Ghani with whom I discussed the Afghan election. He was one of  the friends I made during the fraught year I spent in Afghanistan. Many seem to cleave naturally to Dr Ghani.

After polling day, my friend Ghani described the joy he felt in being able to vote (with his wife) for the man he believed best placed to lead Afghanistan for the next five years. “Though it’s private,” he said, “I will confess I voted for Dr Ghani and that’s not because my name is Ghani too.”

His attempt at humour sat oddly with the rather solemn little man I knew. I could only put it down to an extraordinary lightness of being at this particular point in his country’s tryst with destiny.

The audacity of hope.