Jacmel: Pearl of the Caribbean. Precious stone set in the brilliant sea 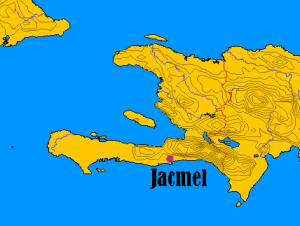 It’s been almost exactly a month since Jacmel in southern Haiti formally applied to become one of UNESCO’s Creative Cities. If it’s successful – and we’ll know by November 30 – Jacmel would be the first ‘Creative City’ in the Caribbean and a member of an exclusive global urban club. Starting with Edinburgh in 2004, the UNESCO Creative Cities network has expanded to just 41 members so far. Spread across seven categories, it’s safe to say that the choice is carefully made. Cities of Design include Berlin and Buenos Aires; Aswan and Santa Fe are Cities of Crafts and Folk Art; Dublin and Krakow are Cities of Literature; Lyon and Sapporo are Cities of Media Arts; Bologna and Brazzaville are Cities of Music; Chengdu and Zahle in Lebanon are Cities of Gastronomy and there are just two Cities of Film, Bradford, Sydney (Why not Mumbai? Or Lagos?)

Jacmel would be a welcome addition to the club. It’s hard to imagine a Caribbean city that better deserves the honour (though there might be some gnashing of teeth from over the border). Though its charms are slightly faded, hotels expensive (and not really value for money, as is the case with tourist amenities almost everywhere in Haiti), Jacmel is legitimately described as the “undisputed handicrafts capital of Haiti”, with wall to wall papier-mâché masks and a unique cultural energy.