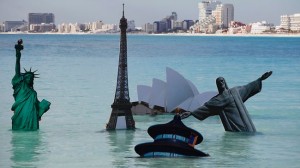 Perhaps it takes a self-confessed Skeptical Environmentalist to tell it like it is. Bjørn Lomborg, an adjunct professor at the Copenhagen Business School, recently wrote about what is rightfully called global warming’s upside-down narrative.

He questioned the repeated assertion by political heavyweights from US Secretary of State John Kerry to UN Secretary General Ban Ki-moon that climate change is “the greatest challenge of our generation.”

How can that be, asked Professor Lomborg, when we live in a world where one in six deaths are caused by easily curable infectious diseases; one in eight deaths stem from air pollution, mostly from cooking indoors with dung and twigs; and billions of people live in abject poverty, with no electricity and little food.

He concludes, “We ought never to have entertained the notion that the world’s greatest challenge could be to reduce temperature rises in our generation by a fraction of a degree.”

That’s a persuasive worldview as seen from Haiti, with its millions of poor and wretched people and no sign of a rainbow on the dusty horizon.