Thirty-three years after Bob Marley, Get Up, Stand Up, get going #Haiti 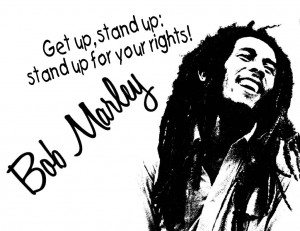 Monday was the 33rd anniversary of Bob Marley’s death and television channels across Haiti ran a somewhat weather-beaten, if riveting documentary on the life and times of one of modern culture’s most popular and the most misunderstood figures.

That is, of course, entirely unsurprising. As George Lipsitz writes in his book ‘Footsteps in the Dark: The Hidden Histories of Popular Music’, “Bob Marley’s prominence resonated powerfully in Haiti in the 1970s and 1980s…Many Haitians embraced the Jamaican singer’s music and his persona not only because he was a great musician who wrote politically charged pro-Black lyrics but also because he was a Caribbean worker who labored for a short time in the United States, a believer in an Afrocentric religion that recognizes no official church hierarchy, and a successful Black man who spoke up politically on behalf of the poor and against colonialism.”

Thirty years later, Bob Marley remains enormously important to Haiti. He was the inspiration for the band Boukman Eksperyans, which blends rara, rock ‘n’roll and a raw political sensitivity.

And Wyclef Jean, of course, counts Marley as a role model.

And then there’s ‘Get Up, Stand Up’, Marley’s energizing anthem for Haiti, apparently written as he left its shores.