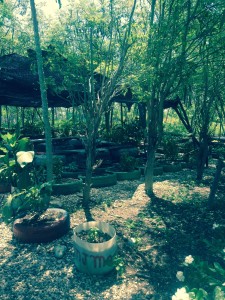 The Jaden Tap Tap is an oasis – cool, shady and green. And it is a paradox, a beautiful and peaceful garden in Cite Soleil, a tough-bitten urban eyesore that is often described as the one of the most dangerous slums in the western hemisphere.

The Jaden Tap Tap is a community garden, created three years ago by three men with a dream, sans any official backing or even the money for an irrigation pump. (They still don’t have a pump and the authorities seem uninterested in the effort.) 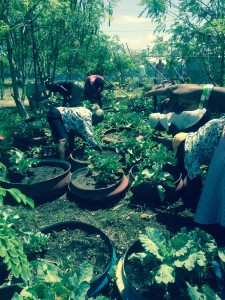 The garden was started on a former garbage dump, using brightly painted tyres for pots and the willing labour of people who live in the tent camp across the road. They straggle across, tilling and planting in the quiet green space, eventually harvesting the vegetables for the family cookpot, sharing fairly and equitably. They take seeds and plants home and start container gardens. For them, it’s a chance to leave behind, even if briefly, the ugly, stifling reality of their lives in the plastic tents.

“I love to come here. It’s a pretty space for the community,” says Joseph Fanie, a large old lady who suddenly appeared in the garden with other Citi Soleil residents, hoe at the ready. They reluctantly halt the cheery song they’re warbling as they work, to answer questions. “I’ve started my own garden,” says Ms Fanmie proudly.

It is proof if any were needed of the powerful example set by the Jaden Tap Tap, now Haiti’s largest urban garden with aspirations to link up with the well-known American urban agriculturist Will Allen’s Growing Power movement.

“We want to give the people of Cite Soleil a model of success. Something to do. And something to eat too,” says Mr Tillias. He means the garden’s abundant produce. It has 20 kinds of vegetables and herbs – eggplant, peppers, chard, radishes, potatoes, parsley and basil. And there is the quick-growing, nutritious moringa tree, its leaves rich in protein and vitamins, which poor Haitians add to juices, soups, cornmeal and rice. The Jaden Tap Tap shows that “something positive can come out of Cite Soleil,” says Mr Tillias.

It is a good point. The neighbourhood, which is mostly hardscrabble land, with plastic tent camps as far as the eye can see, is routinely on every diplomatic mission’s ‘red zone’ or no-go list.

”We’re trying to turn it from a red zone to yellow and then green,” say the Jaden Tap Tap’s creators, pointing to at least 25 smaller copygat gardens that have sprung up in the slum.

Mr Tillias and his fellow dreamers, Herode Gary Laurent and Franz Francois, envisage the two-year-old, 10-feet tall, still-spindly Moringa trees as tomorrow’s “forest”. It is the “tree of life”, says Mr Tillias, “because almost every part is of some use to man or animal.”

A part of the garden is a Moringa nursery and people are encouraged to “grow a mini forest in an old tyre. You don’t need space to garden, we tell people, you just need to want to.”

(This blog is part of CITIES’ We Own the City global urban blogger competition, which seeks to explore and implement the institutionalization of the bottom-up movement and expand the dialogue on more inclusive urban development. @CITIESONLINE)