The point of Fallingwater is not comfort & liveability but dramatic vistas 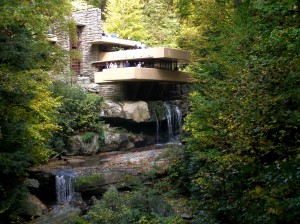 Wright, who wasn’t very tall himself, is anecdotally said to have been profoundly unsympathetic to big people. Rivera was a big man.

But what of the Kaufmann family? How did they like living at Fallingwater, the enormously expensive weekend home Wright built for them? Mrs Kaufmann famously enjoyed the guest wing and the six-feet deep, stream-fed, outdoor pool. Young Mr Kaufmann refused to sleep where the great architect decreed – ie in the dark, little bedroom he had designed for him. The young man turned it into a study and put a single bed in a light, bright corner of his wing. It must have been bright and beautiful to sleep there but it is, emphatically, a small space, about the size of a closet. All the bathrooms at Fallingwater are small functional places. The kitchen (now roped off and used as a lunch room by the tour guides) seems barely comfortable too. The point of Fallingwater is not that frightfully bourgeois concept – liveability, comfort. It is about dreams and drama, uniting with nature, celebrating its seasons, living with, living in, nature’s moods. As Wright told the Kaufmanns when they protested at his placing the house on top of the waterfall rather than across: “I want you to live with the waterfall, not just look at it, but for it to become an integral part of your lives.”