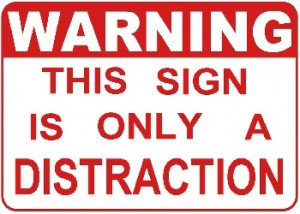 “We might need to be irresponsible,” Hanif Kureishi once wrote in an inimitable ode to the virtues of being distracted. He was arguing for the urge to militate – against the standardization of human beings and notions of achievement that are limiting, prescriptive and bullying.

Back to Mr Kureishi. Many might wonder at the extraordinary tendency of successful people to prescribe laissez faire. Mr Kureishi, it’s worth remembering, was included by ‘The Times’ London in its 2008 list of the “The 50 greatest British writers since 1945″. He is no slouch – intellectually, or in the hard work and focus department. Why then, is he advocating the virtues of being distracted?

Why not, is the short answer. Surely Mr Kureishi’s success should not disqualify him from peddling theories, even if some seem like nostrums?

But his advice on disciplined distractedness sounds like the real thing. Here goes: “…to follow a distraction requires independence and disobedience; there will be anxiety in not completing something, in looking away, or in not looking where others prefer you to. This may be why most art is either collaborative — the cinema, pop, theater, opera — or is made by individual artists supporting one another in various forms of loose arrangement, where people might find the solidarity and backing they need.”