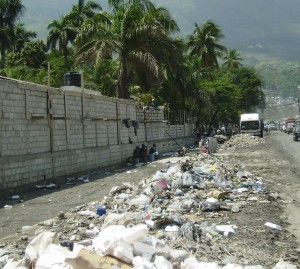 The Haitian Prime Minister’s office has sent out a press release reporting that the great man himself, his health minister and others have been discussing Haiti’s health problems in Boston with Paul Farmer, “the man who would cure the world.”

For those who aren’t au fait with the American anthropologist and physician famous for his work providing “first world” health care for “third world” people, Dr Farmer is the subject of the award-winning book ‘Mountains Beyond Mountains’ by Pulitzer-prize-winning author Tracy Kidder.

Famously, he succeeded his friend and co-found of Partners in Health Jim Yong Kim as chairman of Harvard Medical School’s Department of Global Health and Social Medicine upon Mr Kim’s elevation to World Bank president.

Dr Farmer has generally been a force for good in Haiti, though there are bound to be people who will tell you different. But the Prime Minister’s press release made me wonder if Dr Farmer speaks plainly enough to the Haitian authorities. The press release suggests that Prime Minister Laurent Lamothe and his Health Minister (a medical doctor) Florence Duperval Guillaume wanted to find “lasting solutions to health problems facing the Haitian population, including cholera and chikungunya.”

Surely someone (perhaps Dr Farmer?) should make known to them that the only lasting solution is for Haiti’s government to deal with the filth and neglect on a war footing? That poverty does not automatically mean dirt? Some of the poorest tribals in the world have impeccably clean – if Spartan – lives.

T’was well said even the dictionary definition of “living in squalor” does not directly imply poverty. It could just as easily be neglect.

(Tomorrow: Fat or thin, those who live in poor megacities are beset by disease. Here’s why)