Around an empire in many cities. What of France in Port au Prince? 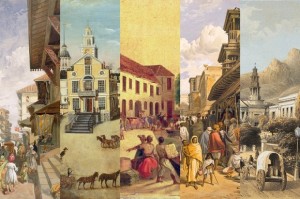 Tristram Hunt’s ‘Ten Cities That Made an Empire’ explores, as The Guardian says, “Englands around the world, from Barbados to New Delhi”.

The Guardian calls it ‘Greater Britain’, the ring of “British settlements” that marked the length and breadth of the Empire.

Mr Hunt, a respected politician and author, explores the growth trajectory and culture of cities around the Empire, such as Bridgetown in Barbados, Boston, Dublin, Cape Town, Calcutta, Hong Kong and Delhi.

Calcutta, for instance, was changed forever by Governor Richard Wellesley who stamped out laxness and dissoluteness such as drinking and gambling. Dublin was remodelled along British lines, as evident in its townhouses, parliament and Custom House.

All of this brings one to Port au Prince and the French influence on this former colony. It’s most apparent in the language spoken – and written – kreyol and French respectively. The culture of the baguette and other subtle tastes of France are obvious in many Haitian dishes. But almost no architectural imprint remains.