So did Columbus safely sail the Santa Maria into Haiti’s Caracol Bay? 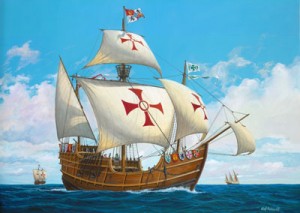 The arguments over Christopher Columbus’s Santa Maria, continue to rage, as recently reported by The Daily Telegraph. Marine archaeologist Barry Clifford, who publicly claimed last month that he had found the shipwreck, was reportedly in Haiti (perhaps he’s still here) to bang the drum. Meanwhile, Portuguese-American historian Manuel Rosas has been rubbishing the whole story on the grounds that the ship never really sank and Columbus cannily misreported it all. The reason, according to Mr Rosas, who has studied the issue for 20 years, is that Columbus was spying for the Portuguese king though he took the Spanish real. The Santa Maria, he says, entered northern Haiti’s Caracol Bay safely and was used as a sort of early shipping container sort of housing for sailors. Eventually, he claims, it burned down.

Mr Rosas’ book, ‘Columbus – The Untold Story’, apparently argues that an anchor from the ship, which was discovered in Limonade in Haiti, was found on land. More specifically, it was found on a plantation. This, he says, strengthens the argument against the Santa Maria having sunk.

Who knows? Haiti has been all atwitter – in the old-fashioned sense, sans tweets – with excitement over the news.

The said anchor is now safely in the MUPANAH, Haiti’s national museum in Port au Prince. And the competing claims hang precariously in the ether.