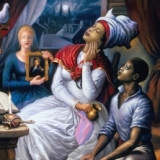 The Santa Maria’s anchor. Crowns of Haitian emperors. The bell that declared Haiti was free. The MUPANAH, or Musée du Panthéon National Haïtien in Port au Prince has many treasures, built up slowly from 1983.

I visited again just recently, to see an exhibition of Haitian-American artist Ulrick Jean–Pierre’s paintings. His style, I’m told, ranges from surrealism to traditional portraiture but the MUPANAH’s compelling series is devoted to the highpoints of Haitian history (and New Orleans’ culture).

–       A portrait of Jean-Baptiste Point du Sable from Saint Marc, who is regarded as the first permanent resident of Chicago.

–       Frederick Douglass, the African-American social reformer, orator, writer and statesman, a former slave who went on to become the third US ambassador to Haiti.

My favourite though is not a strictly Haitian subject at all, an oil of Marie Laveau (see top right) a Louisiana practitioner of Vodou renowned in New Orleans.