Mamba mia: Haiti and the glorious possibilities of peanut power 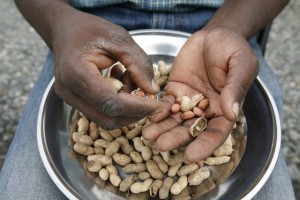 Haiti may be energy-poor but it is rich in peanuts, aka mamba. So why not borrow an idea from the pistachio-producing Turks, who are planning to turn those tonnes and tonnes of discarded shells into biogas, thereby powering their first eco city?

It’s really rather a good idea, locating the new city in Gaziantep province in the south, near the Syrian border, where half of Turkey’s pistachios are produced.

This OZY piece quotes Seda Muftuoglu Gulec, a Gaziantep municipality expert on green architecture, to say that Turkey is merely making a virtue out of a necessity – getting rid of pistachio shells and producing power in one fell swoop. “If the region was abundant in wind power, we would use wind energy,” he explains.

Apparently, a French environmental engineering company Burgeap first proposed the idea to the Turkish government, arguing that nutshells are the most efficient source of alternative energy in the region. As the former colonial power, perhaps the French might consider advising Haiti on the possibilities of peanut power? Macadamia nutshells are being used in Australia to produce biogas. And in Monterrey, Mexico, methane from decaying garbage is being turned into electricity to light up the city.