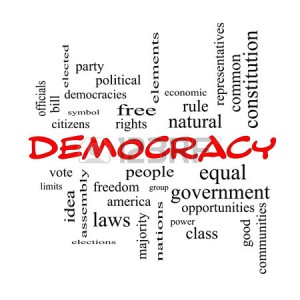 Democracy, says Isobel Coleman of the Council on Foreign Relations, is going through a rough patch. She might have just as well said, it’s getting a bad name. Even incurably democratic countries such as India have plumped for a strongman figure as leader, albeit entirely democratically. (In fact Prime Minister Narendra Modi’s victory was one of the most decisive in India in 30 years.)

Egypt has junked its fledgling democracy and “elected” its former army chief. Syria has “voted” for Bashar al-Assad.

Thailand has put democracy on hold, at least for a year.

Ms Coleman notes a recent dismal report on the ever fewer number of democracies around the world but goes on to take a bracing view of its potential still to change the world.

She quotes a new report, “The Democratic Alternative from the South: India, Brazil, and South Africa,” by Ann Bernstein, executive director of the Centre for Development and Enterprise in South Africa. This says democracy is the only way for countries pursuing growth to have built-in self-correction mechanisms.  This means out-with-the-old-in-with-the-new. In a word, elections. Real ones. As in India (and it’s irrelevant whether you like Modi or the result).

to address bad policies and hold politicians accountable. As consolidated democracies, Brazil, India, and South Africa have established strong institutions to battle corruption and abuse of power, ensure effective democratic governance, and create more transparency. Among these institutions are Brazil’s Supreme Court, which tried several of former president Lula’s senior staff in the country’s largest corruption case, and South Africa’s office of the public prosecutor, which investigates and addresses abuse of powers and misconduct in government.

In a meeting at CFR last week to discuss the report, Bernstein noted that democracies often look messy and even politically chaotic from the outside, but they are surprisingly resilient. Autocracies, on the other hand, appear to be stable and efficient, until quite suddenly they aren’t. And their meltdown can be spectacularly painful.

The case studies of Brazil, South Africa, and India are great reminders that democracy can take root in all types of societies at different levels of development. It is not restricted to just rich countries; indeed, for these countries (and many others) democracy is the path to inclusive growth.