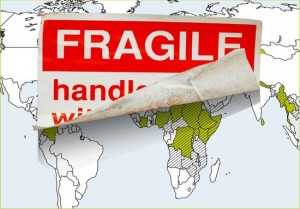 Haiti has a place in the world’s top 10, but there’s little to celebrate. It is ninth on this year’s fragile states index released by US-based research institute The Fund for Peace. The list was renamed – from failed to fragile states index – barely a month ago, but it still makes for a dubious fraternity of nations.

Haiti is flanked by Yemen (#8) and Pakistan (#10), both beset by the instability caused by extremist Islamist groups. Haiti’s island-neighbour, the Dominican Republic, is at a respectable #95, which is 14 places less fragile than India (#81).

The top six positions on the fragile states index is taken by countries in sub-Saharan Africa. Afghanistan is at #7. South Sudan, the world’s newest country, is #1 for its chronic instability, fractured leadership and growing ethnic conflict.

Haiti owes its position in the top 10 to a catalogue of familiar problems – the cholera epidemic, of course, but more tellingly, its failure to hold long-overdue local and legislative elections and incredibly high levels of corruption and cost of living.

The index is mildly encouraging in its assessment of Haiti’s “return to a trend of improving in small increments”, making approving note as well of former dictator Jean Claude ‘Baby Doc’ Duvalier’s first court appearance in February on charges of human rights abuse. “Whatever the outcome of proceedings, the precedent of forcing former political leaders to answer for their actions is a positive step forward,” says the index, raising the faint hope that Haiti might move out of this dismal top 10 some time soon.