Both Haiti and India reveal the rich irony of poverty definitions 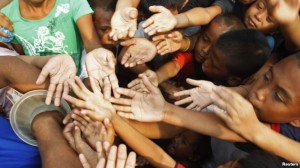 Extreme poverty has fallen in Haiti, according to figures quoted by the World Bank’s managing director, but in India, poverty is up because there’s a whole new definition of the condition.

In India, it was 29.5% in 2011-12. But that’s according to new criteria recommended by a committee headed by a former chairman of the prime minister’s Economic Advisory Council, Chakravarthi Rangarajan. It set a very high standard to measure poverty, namely that if a rural family of five spends less than $80 a month or an urban family less than $150, they must be deemed poor. This would make 363 million Indians, or 29.5%, poor in 2011-12. Not a great report card for a country with so much potential and aspiration, but rather better than in 2010. Then, going by the new criteria, 38.2% of Indians were poor. Clearly, even the high bar cannot erase the encouraging reality of India’s poverty statistics –  they’ve improved enormously within a two-year period.

I’m not sure what criteria have been applied to the new survey of Haitian households but hopefully, the bar was not set way at the very bottom of the scale of human existence.

(Tomorrow: The business of welfarism matters more than definitions of poverty)