Which technology is costly for the rich and relatively cheap for the poor? 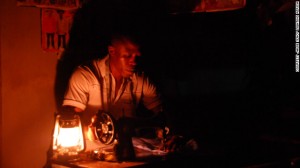 Speaking of solar power in sun-drenched Haiti, here’s a rather unique estimation of the importance of this technology in two million years of human endeavor.

British Museum director Neil MacGregor chose a solar-powered lamp and charger to end the last episode of his wonderful  BBC Radio 4 series, ‘A History of the world in a hundred objects’. It’s significant that he chose this object as the last of the hundred he used to illustrate the wondrous arc of human history. He started with  a roughly shaped stone chopping tool from East Africa and ended with this coffee mug-sized object made in Shenzhen, China in 2010. It symbolized the future most powerfully of all,  glowing brightest because it has the potential to change more lives than any other.

Most of the poorest people on the planet live in the sunniest latitudes and need no more than a simple solar-powered lamp with a mobile phone-charging slot to literally empower themselves.

Mr MacGregor describes it beautifully. ”Sunshine, captured, harvested and stored, to be taken out and used whenever and wherever we need it… Our solar panel could give the 1.6 billion people without access to an electrical grid the power they need to join the global mobile conversation. Putting communities in touch, giving access to information about jobs and markets, and providing the basis for informal and highly effective banking networks, so that local businesses can start up on a shoe-string.” (Click here to read my Guardian piece on solar power in Haiti.)

And interestingly, solar power makes more sense in poor countries like Haiti than the rich ones. As Mr MacGregor points out, “although silicon is cheap and sunshine is free, solar panels big enough to generate the gargantuan amounts of electricity that rich countries devour are still prohibitively expensive. The poor are more modest in their demands and so, paradoxically, this technology which is costly for the rich is cheap for the poor.”