Never mind vodou, the Cardinal can’t save Haiti if he quits what he started 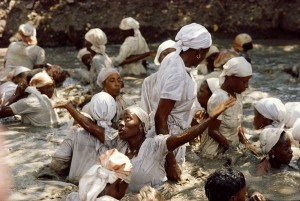 Haitian Cardinal Chibly Langlois has issued a mea culpa. Of sorts. A press release from his office in Haiti claims the Cardinal never said vodou was a “big social evil” for Haiti. True, he didn’t. He said it was a “big social problem”. And I quoted him as such in my article in The Guardian.

As a man of God, the Cardinal probably rarely has to reckon with the demon of technology. Everything he said – tout bagay – during my interview with him, was recorded. With his grateful consent. The recording includes the translator’s words and my questions.

I have some sympathy for the Cardinal’s attempts to appease his angry flock. It may seem more politic, I guess, to row back.

Except that he might be doing exactly what he insisted he never would – ie take the easy, more salubrious path out of the thicket of controversy. Remember when he quoted his boss? “As Pope Francis said, he would rather have a church that gets its hands dirty than one that is closed in on itself,” said the Cardinal. “I should work to help provide a better solution to the country even if I know I’m taking a risk.”

The risk he took in saying vodou is “a big social problem” was that he nailed Haiti’s lamentable condition – not because it believes in vodou, but that it has nothing else to rely on. He seemed pained, as I reported, that Haiti’s political and judicial incoherence left his people no option but to turn to the ‘magic’ of vodou for solutions. Or salvation.

As he said, “If a person is well educated and has the financial means, they will go to a doctor [instead of the voodoo priest] when they get sick. If that same person went to the court to get justice they would not go to the voodoo priest to get revenge. It’s a big problem for the church. And for Haiti.”

It’s a plea for more efficient politics, better governance, a commitment to rule of law.

Hard to argue with that.

But sadly, the Cardinal has turned away from continuing the argument he started.

Kipling said it, long years ago:

“If you can bear to hear the truth you’ve spoken
Twisted by knaves to make a trap for fools,
Or watch the things you gave your life to, broken,
And stoop and build ’em up with worn-out tools…”