The scramble for Africa: US hype sandwich versus a Chinese stir fry 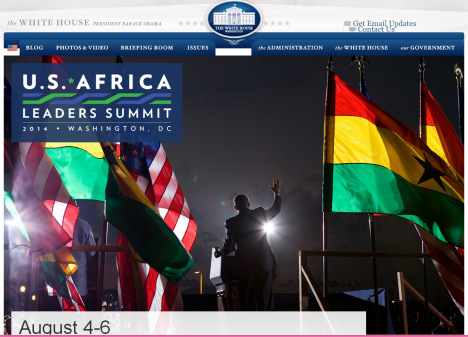 This is a good time to be in Washington, D.C. For three days, one can expect to see African headdresses, Dashiki, Princess kaftans, Babariga outfits and possibly even hand-loomed Yorua Aso Oke and high-grade Guinea brocade here. On TV screens and may be on the streets too.

This is the largest single engagement by any US President with Africa and Brookings’ Senior Fellow George Ingram says it’s time to “reexamine the storyline around Africa”, recommending “cautious enthusiasm, but enthusiasm nevertheless”.

Caution is the very word. As Mr Ingram points out, the locus of extreme poverty has shifted from Asia and Africa to principally Africa in one generation (1990 – 2010). “The vast number of countries with extreme poverty affecting over 40 per cent of the population are in Africa.”

The top five on the 2014 Fragile States Index are in Africa – South Sudan, Somalia, the Central African Republic, the Democratic Republic of the Congo and Sudan.

But then there is the good news. Cautiously good perhaps, but good news nevertheless.

– Seventeen countries, accounting for more than 40 per cent of Africa’s population, have experienced economic growth greater than three per cent per capita since 1996.

– In the noughties, six of the world’s 10 fastest-growing economies were in Africa.

– It was the fastest-growing continent (5.6 per cent) last year.

– Most African countries have achieved universal primary enrollment rates of 90 per cent or more.

– The proportion of women in African countries’ national parliaments has reached nearly 20 per cent.

– Health is much better than before with under-five mortality declining by 47 per cent and maternal mortality falling by 42 per cent from 1990. HIV/AIDS prevalence rates have dropped a whole percentage point from 5.9 in the decade from 2001.

But here’s the catch. Some say the summit amounts to a thin slab of filling sandwiched between hubris and hype.

Instead of flying to Africa and talking to the African Union, President Obama has rather grandly crooked his finger and invited leaders to visit him instead. To top it all, he won’t even be meeting them. And then there’s the whole conditional trade kerfuffle.

Is it any surprise that many African leaders would pass on the American sandwich and choose a Chinese stir fry instead, free of any strings except possibly noodles?

(Tomorrow: The scramble for Africa II – Flip-flops and the Chinese footprint)