Pay What You Want: Salutary tale of two cities, Berlin and London 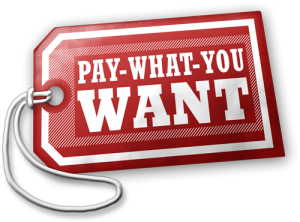 My first experience of the Pay What You Want (PWYW) economy – that Utopian world of no prices, just a powerful conscience – was in Berlin. We were in Prenzlauer Berg, a rather neglected area in the days of the German Democratic Republic, but gentrified and expensive (a bit like Nottinghill Gate in London) by the time I got there in 2005.

My Berliner companion suggested repairing to a “wonderful little wine bar.” She said it was “quite remarkable because …oh, you’ll see.”

It all sounded very mysterious and I wondered what made the place unique.

It was PWYW. Or to be exact, after an initial cover charge of two euros per head, you could eat and drink whatever and however much you wanted. You left at the end of the evening having paid what you wanted or what the food and drink was worth to you.

I thought the concept charming but probably difficult to replicate in countries and cultures where honesty is often about what you can get away with.

PWYW is, as Ozy says, “a bet on human nature” and like many gambles, it doesn’t always work. Apparently, a Chinese restaurateur who tried it was forced to close after four months because too many people wanted to eat for free.

That said, people who’ve been studying PWYW see a trend towards social responsibility and a sharing economy.

Ozy quotes Ayelet Gneezy, a professor at UC-San Diego’s Rady School of Management, to say that the rise in social entrepreneurship and mistrust of corporations make for a changing culture, a greater propensity perhaps to make PWYW work.

Hmmm…I’m told that they’ve tried PWYW at some restaurants in London but not with the sort of success as in Berlin.