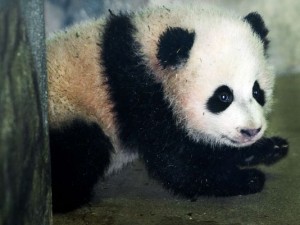 Watching Bao Bao, the 10-month giant panda at Washington, D.C.’s zoo, can be an absorbing experience, even though she did little else but sleep in a darkened corner.

But then Bao Bao is a very special, very big, little person. She is, as the Smithsonian National Zoological Park says, “an ambassador for her species”. Bao Bao’s 20-something-pound person in the heart of the American capital, represents Sino-US cooperation going back decades. And the great triumph of panda diplomacy.

More than 20,000 Americans came to see Ling Ling and Hsing Hsing, the country’s first giant pandas, on their very first day at the zoo. That was 1972; the great bears had been despatched from China as a gift to the American people, to commemorate President Nixon’s historic visit.

As it turned out, the pandas were a wonderfully astute gift, becoming wildly popular. Even today, Bao Bao and her parents are high-wattage celebrities and it’s hard to deny the soft power exerted by so cuddly and distinctive a creature.

As recently as January, on Bao Bao’s public debut, The Washington Post quoted a D.C. resident to say he was utterly charmed. “They’re such majestic creatures. They’re wild animals, but their gentleness appeals to all of us.”

In a more practical sense, Bao Bao is living proof of the careful new attention paid to how these great bears reproduce and new international collaboration on protecting an endangered species. In the decades since Ling Ling and Hsing Hsing got here, more than 350 giant pandas now live in zoos and research centers around the world. And there have been great advances in giant panda biological knowledge, so much so that Chinese scientists are even preparing to start reintroducing pandas born in human care to the wild. (On Tuesday, August 12, a zoo in Guangzhou announced the world’s first surviving panda triplets. They’re being hailed as a “miracle” given the animal’s famously low reproductive rate.)

Bao Bao herself was born as the result of a precisely-timed artificial insemination performed by Sino-US scientists, and is D.C. zoo’s first baby panda since 2005 to survive more than a few days after birth. Her parents, Mei and Tian – the second pair of giant pandas to arrive at the zoo from China – are the focus of an ambitious research, conservation, and breeding program designed to preserve the species. So, watching Bao Bao sleep, something she can do up to 20 hours a day, is something of a privilege. As also a mini lesson in conservation science, zoo-keeping and foreign affairs all in one.

(Tomorrow: Why Bao Bao’s place in the world goes much beyond panda diplomacy)