Why linguistic nationalism can never be good news, even if it is in English 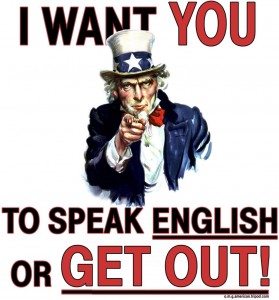 Back in 1919, US President Theodore Roosevelt had a dream. That America have “but one language … the English language …(and) that the crucible turns our people out as Americans, of American nationality, and not as dwellers in a polyglot boarding house”.

The President’s dream did not come to pass, or at least not in any way that would make Americans intolerant of other languages and/or language differences.

But the English-only movement refuses to die in the US and Eric Miller, assistant professor in communication studies at Bloomsburg University of Pennsylvania, offers an excellent explanation.

He adds, “Commonality of speech creates a web of connections that hold a people together. Language is a national identity, to be preserved and protected, generally by the expulsion of others.”

It’s an interesting, though not particularly new, point. So, for instance America’s rising Hispanic population can be attacked on language policy grounds rather than racial terms. Nothing new about that too either. Back in the mid-1700s, Ben Franklin was complaining about the rising German population’s stupidity, ignorance and ever-larger numbers. “They will soon out number us, that all the advantages we have will not, in My Opinion, be able to preserve our language…”