Hamlet hits Haiti: Elections to be or not to be, that is the question 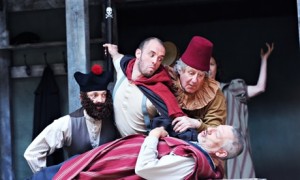 The Globe came to Haiti this past week. On Thursday, August 28, the London Globe theatre brought its production of Hamlet to Port au Prince.

It was part of an unprecedented two-year global theatrical adventure embarked upon by the Globe on April 23, the 450th anniversary of Shakespeare’s birth.

Under the stewardship of its artistic director, Dominic Dromgoole, the Globe set out to take Hamlet to every country in the world.

Haiti is the 39th of 200 planned stops. As the Globe says, it travelled 38,523 km to reach Haiti and its next show will be 347 km away. Nine-tenths of the globe awaits the Globe.

Even though the Port au Prince production was laid on at the Karibe Hotel – the Haitian capital has no theatres, functioning, absurd or otherwise – and tickets were dear ($50 a head), some of Hamlet’s best-known lines must have found extraordinary resonance. With Haiti grappling with the receding prospect of long-overdue elections, the line “to be or not to be” has to have special meaning.

Director Peter Brook explains it well. “The six simplest words in the English language are to be or not to be. There is hardly a corner of the planet where these words have not been translated. Even in English, those who can’t speak the language will at once recognise the sound and exclaim ‘Shakespeare’!”

And for Haiti, which borrows most of everything that goes into government coffers, what of that other gem – “Neither a borrower nor a lender be; For loan oft loses both itself and friend, and borrowing dulls the edge of husbandry”.