Weasel words from the White House: Tell us something we didn’t know 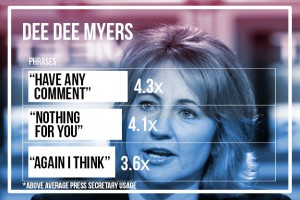 If you’ve ever wondered why you rarely come away from a government (any government) press conference more informed than when you went in, here’s the answer. Press officers don’t brief to provide answers but to evade them.

BuzzFeed has analyzed more than 5,000 White House press briefings since the beginning of the Clinton administration in 1993, looking for “weasel phrases” such as “I can’t comment on,” “I’m not aware [of/that/etc.],” and “I don’t know.”

It’s found, what it calls “21 Years Of Evasive Answers”. Click here for the piece.

Twelve “brave souls”, it says, have accepted the challenge from 1993, of briefing the White House press corps on a daily basis. “As the chief communicators of White House goings-on, press secretaries (official and de facto) must walk a fine line between answering important questions and…not answering them at all.”

Mostly, they don’t answer anything very much.

But the evaders have a pecking order of sorts. The worst offender appears to have been George Stephanopoulos, who averaged “12.5 ‘weasel phrases’ per 1,000 words while representing the Clinton administration,” says BuzzFeed. His successor at the briefings, Dee Dee Myers, was second worst, with 11 weasel phrases per 1,000 words.

It just goes to show perhaps that Dubya’s show had more areas of light than suspected.