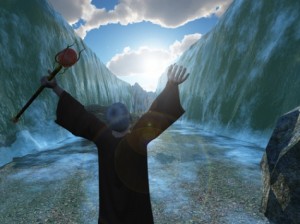 British writer Will Storr tells an interesting story about the science of storytelling, something that might, in some circles, be called the twisted rationale that drives the barmy army. People who fantasize; daydream and believe it; think themselves to be the savior and suchlike. In other words, the loony fringe; those people you see muttering to themselves in the street; preaching about their visions of shape-shifting animals.

Someone like Uganda’s Alice Auma, warlord predecessor of Joseph Kony of the Lord’s Resistance Army. She believed herself possessed by a spirit, an Italian soldier called Lakwena, after she was abandoned by two husbands for infertility. In the throes of a mental breakdown, she took to nature and, as Mr Storr writes, “the animals and the mountains and the waterfalls spoke to her.”

She ended up becoming a noted mystic, developing a following and eventually creating an army to make war on her government.

Alice Auma is someone that might legitimately be regarded as absolutely nuts.

Not so, says Mr Storr. In a rather well-explained piece in Aeon, ahead of a course in London next month on the science of storytelling, he seeks to shine the spotlight of reason on the seemingly mad ways of the barmy brigade.

He’s admirably qualified to do so. First, he’s spent his professional life meeting and writing about such people. Second, he wrote a book on the psychology of belief. It was titled The Unpersuadables in the US and The Heretics in the UK.

He says these believers in a redemption narrative have an “unusually bright and fierce” sense of self. “They’re often leaders, spokespeople, evangelists for their beliefs. They can be intolerant of other perspectives, with little capacity for nuance and doubt. Their hero narratives are strong – potent enough to adapt and survive, agile enough to pirouette across their psychic crises to emerge more powerful.”

(Tomorrow: Vision-and-voices syndrome – Redemption narrative can be the saviour)