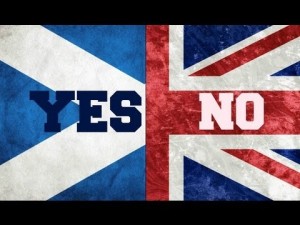 Friday. So, to the conclusive result of Scotland’s referendum on independence. Even before the announcement, I felt there was much merit in a remarkable piece by The Washington Post’s E.J. Dionne Jr. His hunch was that the issue would be decided by “voters whose hearts will say yes but whose heads say no.”

The piece was refreshingly free of the partisan dolefulness, sentimental tone or generally mournful air of the British press on this issue. Mr Dionne acknowledged that the energy of the campaign has been with the ‘yes’ side because “passion, imagination and hope are always more inspiring than reason, calculation and doubt.”

Despite that though, he – in my view, correctly – analysed the Scottish character, its canny prudence and careful consideration of the realities of life. That is debt and currency and how Scotland would fare on its own in a pitiless global economy.

A ‘no’ camp win? One would have to wonder if it was Gordon Brown who swung it. His speech in Glasgow on Wednesday, September 17, the last day of the campaign, was perfectly pitched to address Scottish pride and Scottish pragmatism. Both of these are a peculiarly Scottish combination of virtues.

“The vote is not about whether Scotland is a nation. We are — yesterday, today, and tomorrow. The vote is whether you want to break and sever every link. . . . What we have built together, by sacrificing and sharing, let no narrow nationalism split asunder, ever.”