Pragmatism took Scotland into union with England & has kept it there 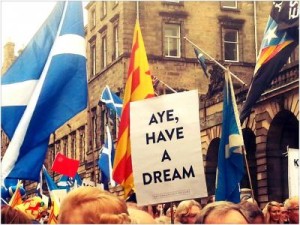 It was pragmatism – and English gold, as poet Robert Burns scathingly noted long years ago – that took Scotland into its 1707 union with England.

It was prudent pragmatism – and the British pound – that kept Scotland in the union on Thursday, September 18.

Scottish commonsense is a wondrous thing. It is self-preserving and rooted in the material world, the here and now. Considering the basket cases one sees elsewhere in the world, would that many other peoples were so shrewd.

In fact, the Union came about because the Scottish briefly abandoned prudence back in the 17th century.

It was a disastrous dream to build a colony in what is now Panama.

Back in the late 1690s, the then independent Scotland (which shared a monarch and a border with England but little else) launched the ambitious plan, with a fleet of five ships, 1,200 settlers, axes, spades and flooring nails, pistols, three horse-drawn carriages and disparate household items. 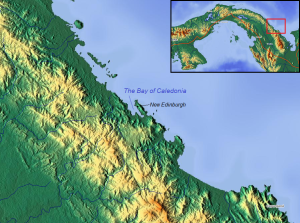 It took between a quarter and a half of the available wealth of Scotland and the lives of the brave but imprudent colonists. They died of tropical diseases within a scant nine months, while the English maliciously refused to trade with the Scots or offer any help whatsoever – not even clean water – in an attempt to stave off any threat to their own trading monopolies.

As the BBC’s Alan Little reported back in May, after a reflective journey to the island still called Caledonia, the scale of Scotland’s public investment in the risky venture was unprecedented. Click here to read his piece. The colony was funded by public subscription. “Public bodies, town corporations, members of parliament, landed gentry, and thousands of private citizens – sea captains and surgeons, apothecaries and ironmongers – sank their life savings into the scheme,” he wrote.

Scotland was left impoverished, accepting union with England within a decade on the promise of compensation for the losses to those who invested in Caledonia.

It’s reasonable to expect that Caledonia still speaks volumes to Scotland, especially of the dangers of rash ambition.

And it frightened them off going it alone 307 years later, in the choppy, turbulent waters of global commerce.