The Riot Club: A parody or posting flaws in great British class system? 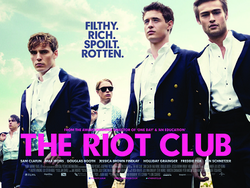 ‘The Riot Club’, the new film about Latin drinking games and debauchery by 10 historically entitled, upper class Oxford students, seems to make a nonsense of the modern, seven-tier British class system unveiled by the BBC and sociologists last year.

The BBC reported the results of what it called “one of the largest ever studies of class in Great Britain” as a long-overdue update on traditional British social divisions. These were simple and brutal – upper, middle and working class. The BBC said they seemed “out of date in the 21st Century, no longer reflecting modern occupations or lifestyles.”

So, the broadcaster and academics devised a new way of measuring class, which factored in “the different kinds of economic, cultural and social resources or ‘capitals’ that people possess.” This was revolutionary in its own way because it took a broad view of the full spectrum of cultural participation – both the opera and the gym – and it took note of a person’s cultural and social life as well as their economic standing. The survey was based on a theory developed by Pierre Bourdieu in 1984.

The results (click here for the BBC report on the new model) identified seven classes:

But ‘The Riot Club’, which is based on Laura Wade’s hit stage play ‘Posh’, faithfully portrays the traditional divisions, as if nothing has changed in Britain in the last century.  The riotous Oxford students are unremittingly posh, upper class and spoilt. Hard-working State-school female Oxford undergrad Lauren is unmistakably “regional” and aspirational. The gastropub owner is decent, son-of-the-soil, working class. Unsurprisingly, both Lauren and the landlord have thick accents.

Is the film accurate? Or the BBC’s new class survey?

Sam Claflin, the actor who plays the lewd upper class student Alistair Ryle in the film, has an interesting take. Gang culture, he recently told the BBC, is often depicted within the sections of society with no power or money, “this is the polar opposite, this is an insight into a world that isn’t looked at very often. You put them in the spotlight, but it’s still gang culture.”

In other words, people are pretty much like each other – and damn the class divide.