What makes a city great? A low percentage of purloined art in museums 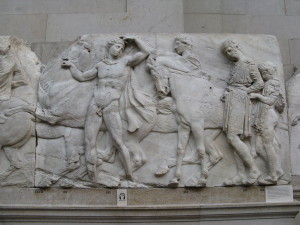 What makes a world city great? Some might say the percentage of art in its museums that isn’t purloined or pillaged.

The British capital doesn’t do particularly well on that score, an inconvenient fact that the great and the good of London constantly elide over. Consider this paean to ill-gotten gains by Boris Johnson, Mayor of London.

In a recent piece in the Spectator magazine, he gave “thanks to the slightly dim–witted 7th Earl of Elgin” for spending “a stonking £75,000 of his own money to rescue treasures from the Ottoman lime kiln” and deposit them in the heart of London.

He meant The Elgin Marbles, a collection of classical Greek marble sculptures and inscriptions that were originally part of the Parthenon and other buildings on the Acropolis of Athens. The Earl of Elgin, Thomas Bruce, removed them from the Parthenon when he British ambassador to the Ottoman Empire.

That late 18th century instance of barefaced shoplifting was eventually made somewhat more wholesome by the British government’s 1816 purchase of the sculptures, after which they were put on display in the British Museum. They now stand in the purpose-built Duveen Gallery, the place that Mr Johnson described as the “holiest shrine of London’s greatest cultural temple”.

Of the Earl of Elgin’s larceny, he had nothing put praise. He “allowed me and every other Londoner to form a glimmer of understanding of that revolution which took place in Athens in the 5th century bc,” wrote Mr Johnson.

That’s all very well but surely there are other ways to fill museums in great cities?  Washington, D.C.’s National Gallery of Act is a case in point. It was conceived of and endowed by Pittsburgh financier and art collector Andrew Mellon. When it opened to the public, the nucleus of its superb collection consisted of 126 paintings and 26 sculptures given by Mellon—from Jan van Eyck’s Annunciation and Raphael’s Alba Madonna to Francisco de Goya’s Marquesa de Pontejos and Gilbert Stuart’s The Skater – and 375 Italian paintings and 18 sculptures from Samuel H. Kress. Mr Kress, of New York, subsequently donated other important works, including the magnificent Adoration of the Magi by Fra Angelico and Fra Filippo Lippi and Laocoön by El Greco.

Not so the British Museum.